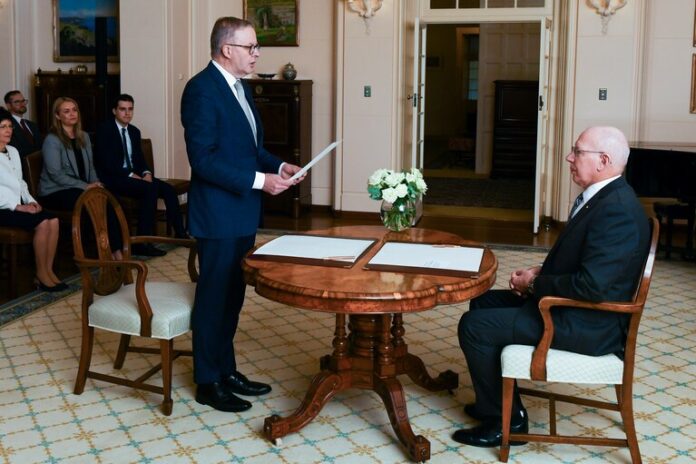 Albanese has been elected as 31st Prime Minister of Australia. Australia’s center-left Labor party has toppled the conservative government after a decade of power.

The new Prime Minister Anthony Albanese got victory in his Saturday election. He made promises in his speech for sharper reductions in greenhouse gas emissions.

Albanese described himself to be the only candidate with a “non-Anglo Celtic” name. However, he is facing an early foreign policy test.

Former PM Scott Morrison accepted a quick defeat despite millions of votes. Now, the new leader has to attend a Tokyo summit on Tuesday.

Albanese will hold the summit with his Japanese and Indian counterparts. Narindra Modi, Fumio Kishida and US President Joe Biden.

Anthony Albanese gave a speech after his victory in the election. He said:

“It says a lot about our great country that a son of a single mom who was a disability pensioner, who grew up in public housing down the road in Camperdown can stand before you tonight as Australia’s prime minister.”

Adding to this, he said:

“Every parent wants more for the next generation than they had. My mother dreamt of a better life for me. And I hope that my journey in life inspires Australians to reach for the stars.”

Aims And Objectives Set By The Labor Party

The Labor party has set their key objectives after stepping in to the government.

Previous articleUkrainian Artist Making Portraits Of Pets, Supported By Reddit
Next articleUS would intercede with The military to Defend Taiwan, says Biden