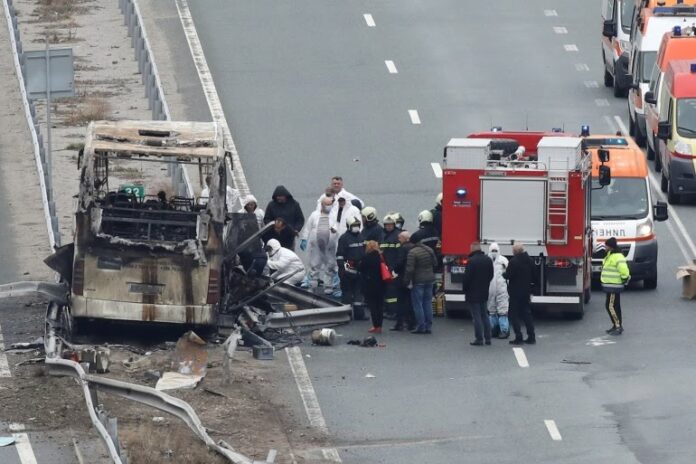 A bus of 55 passengers, crashed and flames erupted in Bulgaria early Tuesday at 3.00 am. It killed about 45 people including 12 Children.

Authorities said that the bus was carrying tourists with children and women. It was from North Macedonia travelling on Struma Highway near Sofia, the capital of Bulgaria.

The bus belonged to a tourist company from North Macedonia. It was coming from Turkey and entered Bulgaria on Monday. Then, the bus was returning to Skopje, the capital of North Macedonia from Istanbul.

Thus the accident took place when the bus was on its journey of around 800 km.

According to the report from Bulgarian National Television, the bus accident killed about 45 people. They said that the bus driver was also among the people who died.

However, seven people had survived by escaping from windows. They include two women and five men. They were then admitted to Pirogov emergency hospital in Sofia.

Due to the fire eruption in bus accidents the dead bodies were severely damaged. As a result the identification of dead bodies became difficult.

After the accident, the Bulgarian Interior Minister Boyko Rashkov visited the accident site. He told the reporters that he saw this was a terrifying accident. Adding to this he said that he had never seen anything like that before.

Bus Crash,  The Causes And Facts

The immediate cause of the accident was the hit to the barrier of the highway. The highway barrier wedged beneath the bus. Afterwards, the fire erupts and kills the passengers.

The officials explored two possible causes of the accident. The first main cause of the accident was the driver’s mistake and the second cause was the sudden technical malfunction of the bus.

However, there were other causes came on the forefront. Such as the guardrail comes in contact with the bus during travel and the issue of fuel leak.

Moreover, the authorities are also investigating the stretch of highway. That is the point where accident took place. They said that this would be a pinpoint to investigate the reasons of traffic incidents.

Thus, officials said that they will clearify the causes of Bulgaria bus accident soon after further analysis.

The bus crash incident took place on early morning time at 3.00 am. While after the accident, the emergency responders came close to the bus and made protective measures.

While the Emergency responders along with investigators made the oversight of incident. There were different persons include police, investigators, media reporters and others.

They have brought fire fighting systems and energency suit to the injured people. However, the investigators and surveyors taken photographs and videos of the site and recorded the damage.

PM North Macedonia To Express Condolences To The Relatives Of Victims

North Macedonia Prime Minister Zoran Zaev expressed condolences to the relatives of victims. He said that these passengers belonged to North Macedonia. Some of them were from Albanian community, an ethnic group.

He added that this was great grief for him to have a loss of 45 lives of Albanians in that tragic accident. Also, he had tweeted about his condolences to the victims’ families.