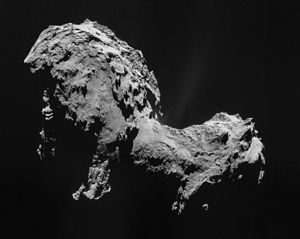 Rosetta’s Rubber Ducky, a comet 67P, made its closest approach to Earth in November 2021. It is now going to Disappear for over  200 years.

Europe’s Rosetta mission was set to target Comet 67P in 2014. It made a closest approach to earth in November 2021. According to EarthSky, the comet will not make an approach near the Earth until the year 2241.

Comet Rubber Ducky approached earth as nearer in November, now can be seen with armature telescope. The comet shining in the space sky takes a closer position with the planet Mars. It is orbiting close to Pollux, which is the brightest star in the constellation Gemini.

However, nine days earlier, it passed perihelion. That is the closest point in the elliptical orbit around the sun. This was then farther about 112 million miles from the sun.

Afterwards, it made its closest pass to the Earth on Friday at 7:50 pm EST (0050 GMT). Now reached at a distance of 39 million miles from the earth. According to Astronomy Now, the comet 67P is orbiting around Mars.

Europe’s Rosetta mission began in 2014. It aimed to target Comet 67P. Interestingly, it was the first ever cometary lander. European Rosetta found the comet 67P after a 10 year journey through the solar system.

Accordingly, Rosetta orbited the comet for more than 2 years. It made observations and measurements of the comet’s interior and its surroundings.

The mission includes a probe known as Philae. Rosetta brought Philae over the comet. The historic landing of the comet 67P took place in December 2014. However, Philae bounced twice with its first touchdown at the comet.

The Rosetta’s Philae failed in clear landing due to the failure of it’s two harpoons that attached the lander to the comet.

It has an orbital period of 6.75 years and a rotation period of about 12.4 hours. Moreover it has a rotating velocity of 135,000 km/h. It is a structure of snow and orbiting in space from a decade and more.

Comet 67P has made an approach to the Sun, the constellations, planets and now to the Earth.

The mission Rosetta proved to be the most important studied research of the time. Rosetta and Philae provided the details about comet 67P.

However, the Rosetta orbiter crashed on the comet’s surface. It has provided results of experiments and observations about the comet.

Those include more up-close photographs and measurements. It said that a comet’s structure is like a snowball having a duck-like shape. This has been the most famous discovery of Rosetta’s mission.

EarthSky made an analysis over the comet’s path. According to which, the comet made one complete orbit around the sun every six years.

Studies say that the comet is now diverging from that of the Earth. Accordingly, it is going to the farther position. Since, it is going further millions miles from the Earth. Now going to Disappear for more than 200 years.

Previous articleEthiopia’s PM Vowed To Lead In The Country’s Battlefront
Next articleSkyscrapers: History And Evolutionary Facts About Sky High Constructions