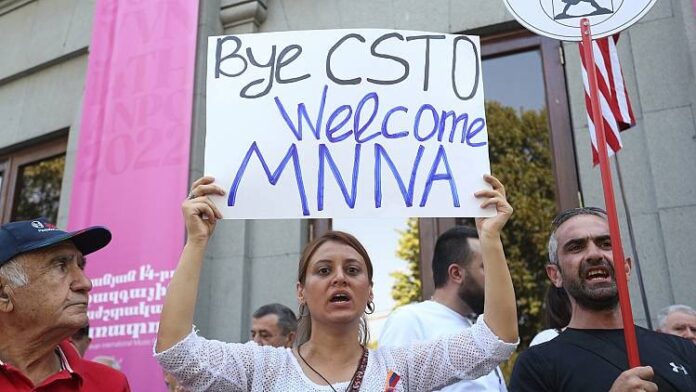 Demonstrators call on Armenia to leave the Moscow-led military alliance. Accordingly, there were over a hundred people gathered in Armenia’s capital, Yerevan.

These demonstrators are demanding their country to leave the Collective Security Treaty Organisation (CSTO). Because, this  organisation has a Russian-led military alliance. And, includes several former Soviet nations, including Armenia.

Recently, demonstrators gathered on streets and made their demands against Russian alliance with Armenia. Accordingly, they argued the alliance did not do enough to protect their country in fight with Azerbaijan.

Now, the demonstrators have called for Yerevan to move closer to Western powers. However, these calls come after fighting broke out along the Armenia-Azerbaijan border last week.

One of the woman at the protest said:

“The US and Europe are our last hope.”

“I am here today because I want us to get out of the CSTO.

On the other hand, another protester said: “this thing called the CSTO is only there to defend Russia’s interests”.

“This organisation had to help Armenia during the war, and it did not help.”

This recent protest comes after the speaker of the US House of Representatives, Nancy Pelosi, visited Armenia for a three-day trip. Accordingly, Pelosi has been the highest-ranking US official to visit Armenia since the collapse of the Soviet Union.

However, during her historic visit, she described the fighting as an illegal attack on Armenian territory by its neighbour.

“We strongly condemn those attacks — on behalf of Congress — which threaten (the) prospects of the much-needed peace agreement.”

“Armenia has particular importance to us because of the focus on security following an illegal and deadly attack by Azerbaijan on the Armenian territory.”