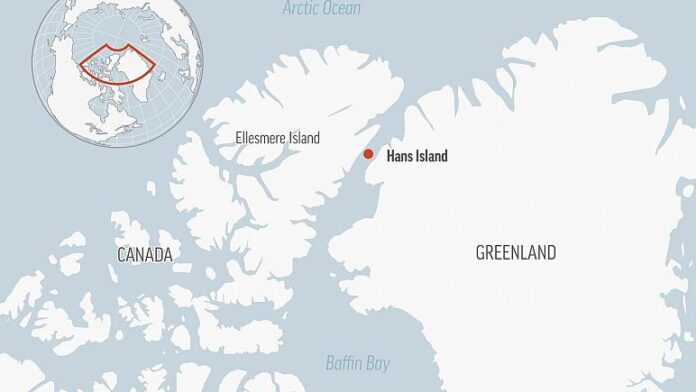 Europe and Canada to have the first land border after the Whiskey war agreement.

Canada and Denmark ended their decades of “war” on an uninhabited island in the high Arctic.

The two countries formally signed an agreement to share Hans Island in northwest Greenland. Accordingly, they are creating the first land border between Canada and Europe, at a ceremony in Ottawa. The Canadian Foreign Minister and his Danish counterpart attended the ceremony.

Europe And Canada To Have The First Land Border

The dispute between Europe and Canada  has been in a dead end for 49 years. Now, it sees the shape of Ledvin Island divided into two parts.

And, an agreement between Ottawa and Copenhagen is being created as a model for resolving territorial disputes around the world.

During these visits, each party hangs a flag and leaves a bottle of whiskey or snaps for the other party.

Then, they exchanged bottles on Tuesday, Mélanie Joly and Jeppe Kofod joked that Canada could now join the European Union. And, the two entities shared a land border.

“The Arctic serves as a beacon for international cooperation governed by the rule of law.”

” it is equally important that democracies such as Canada and Denmark work with indigenous peoples. They should resolve our differences in accordance with international law,” he added.

Accordingly, at a press conference with Danish Foreign Minister Jepp Kofod, he stressed that the conflict – “what many call the ‘whiskey war'” – is “the friendliest of all wars.”

Kofod said the solution to the conflict came at a time when “an international order was under pressure” and attack on democratic values ​, indicating war in Ukraine.

“On the contrary, we have shown how long existing conflicts can be resolved peacefully by following the rules,” he said. Thus, they are hoping to “inspire other countries to follow the same path.”