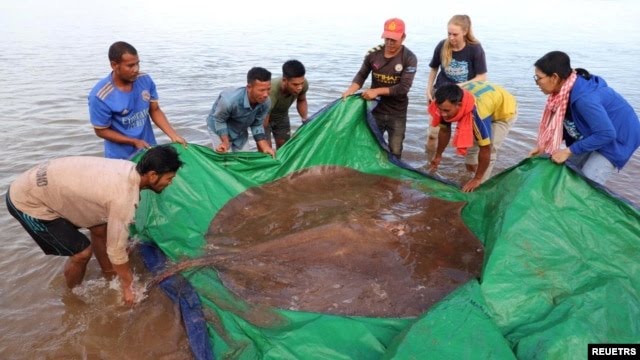 Fishermen in Cambodia along with its team of Marine biologists discovered a giant stingray. They were on a marine expedition to a remote stretch of the river in Cambodia.

During the expedition, they discovered a freshwater giant stingray. They warned that the biodiversity of the region was under threat.

Fishermen In Cambodia And Giant Stingray

The fishermen caught the giant stingray accidentally in 80-meter deep water in the Mekong in Cambodia. However, the Stingray was about 4 meters wide.

The fisherman said that this could be a very remote stretch of river. Adding to this  he said that this was incredibly important for the fisheries and biodiversity. And, also a big stretch of the river that could be under threat.

Read Also: Only 10 of the world’s smallest Marine Mammals have Survived in the world

Zeb Hogan is the fish biologist from the University of Nevada. He led the expedition of USAID-funded wonders of the Mekong river last week.

He said that finding this kind of great stingray with 180 kg weight would be important. After this catch, they significantly confirmed the existence of these big fish in the stretch of river.

On the other hand, Hogan said that for more than two decades, there is a continuous decline in the population of freshwater fish. He analyzed that these figures were very worrying for the biodiversity of the region.

Moreover, Hogan described that this section of river has produced over 200 billion young fish. But, the flood season dispersed these fish throughout all of Cambodia and also into Vietnam.