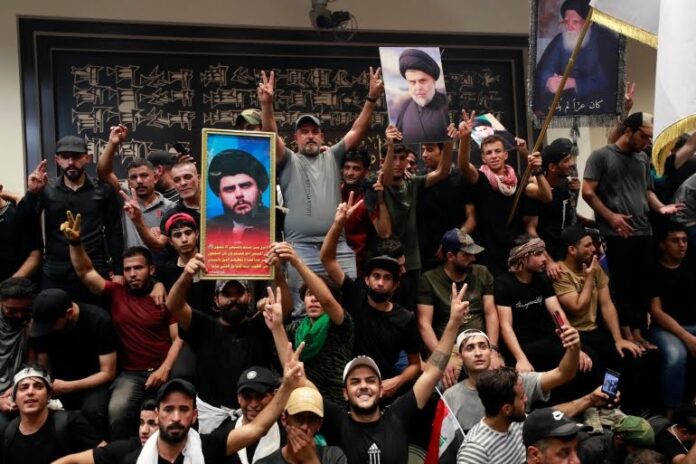 Thousands of protestors storm Iraq’s Parliament building in Baghdad. They are the followers of an influential Shiite cleric who breached Iraq’s parliament on Saturday. However, this was for the second time this week.

Accordingly, they are to protest government formation efforts led by his rivals. This is an alliance of Iran-backed groups.

Read Also: Conservatives To Protest Amid Race To Succeed Johnson

However, the protesters declared an open-ended sit-in and claimed they would not disperse until they answer demands.

But, as the numbers inside the parliament swelled, the police backed off. Then, an expected parliament session did not take place Saturday. Moreover, there were no lawmakers in the hall.

Afterwards, the Ministry of Health said that there were about 125 injuries during violence. Those were civilians and 25 members of the security forces.

Moreover, the demonstrators used ropes to pull down cement barricades. They were leading to the gate of Iraq’s Green Zone. It has government buildings and embassies.

Demonstrators Of Al-Sadr Protested In Iraq

Demonstrators of Al-Sadr protested in Iraq’s parliament. They resorted to using his large grassroots following as a pressure tactic against his rivals. Because, their party had  failed to form a government.

However, they had won the largest number of seats in the federal elections held last October. Now, al-Sadr has intentions on derailing the government formation efforts led by his rivals. And, Iraq’s limbo and political paralysis has ushered in a new era of instability in the beleaguered country.

On the other hand, Al-Sadr had used his following as leverage against his rivals. Then, it had ordered them to occupy parliament on previous occasions. And, in 2016 his followers did the same under the administration of Prime Minister Haidar al-Abadi.