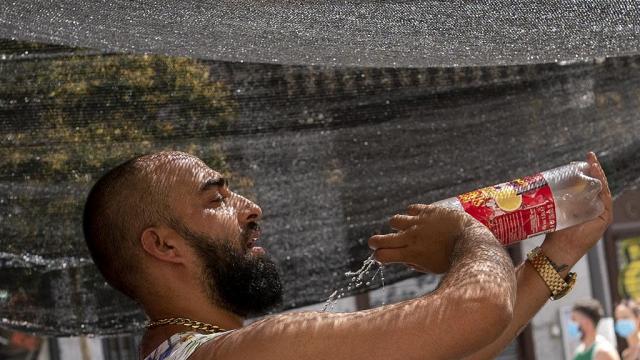 The rising heat sent Europeans across the continent into a battle for shade and water.

Accordingly, temperatures at this time of year broke historical records and in some areas reached more than 40 °C.

The heat wave will spread over the weekend, with temperatures  to exceed 30 °C in much of western and central Europe. Meteorologists say these temperatures are commonly recorded in July and August.

Also, French climatologists claim that this was the first heat wave in France since 1947.  And, believe that it is a direct consequence of climate change.

“It’s increasingly common because of greenhouse gas concentrations in the atmosphere, which are at record levels. Unfortunately, what we’re seeing now is a harbinger of the future.”

The heat is going to be deadly. The French government is particularly concerned about the elderly and is issuing a “red warning” to the authorities. And, this is the highest level of the national heatwave plan.

Authorities in the Gironde department near Bordeaux canceled concerts and other large gatherings. In all these places the recipe is equally heat resistant.

Accordingly, the heat brought a great drought in northern Italy, where it had hardly rained for the last three and a half months. Now, the Po River, the largest in the country, is three meters below average and is seven feet wide.

Previous articleSimba Lion, A Russian Victim Of The Wildlife Trade, Began A New Life In Italy
Next articlePlastic-Busting Inventions To Clean rivers and seas