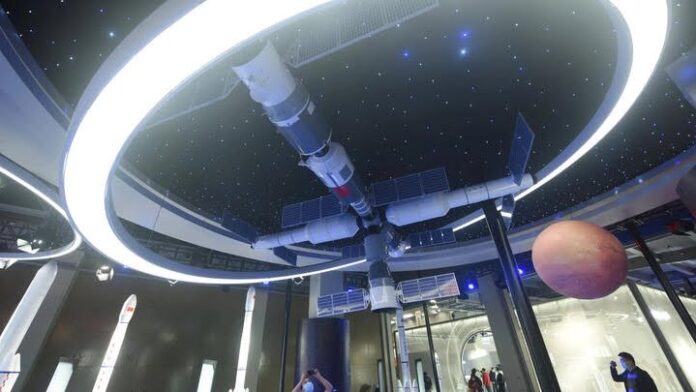 Third long march 5B rocket lifts off with the second module docks at China’s space station. A large rocket stage tracked in orbit

Accordingly, there is a liftoff of the third Long March 5B heavy-lift rocket from the coastal Wenchang spaceport. It was carrying the Wentian space station module into orbit on July 24, 2022.

China has added a new experiment module to its space station Sunday. Now, it is following a high-profile launch from the country’s coastal spaceport.

Accordingly, the Wentian experiment module launched atop of a Long March 5B rocket at 2:22 a.m. The spaceport on the southern Chinese island of Hainan, with crowds watching on from nearby public beach areas.

Wentian is to use its own propulsion system to match orbit with Tianhe. This is the core module of China’s under-construction space station.

And, it has completed rendezvous and docking with a forward docking port at 3:13 p.m. Eastern, July 24. China’s human spaceflight agency has confirmed this recently.

Accordingly, the Wentian module had a mass at takeoff of 23,000 kilograms. The scientists have designed it to host a range of science cabinets for on-orbit experiments. Also, it provides backup life support and propulsion for Tianhe, which launched in April 2021.

Li Dong is the chief designer of the Third Long March 5B rocket. He said:

“This should be a historic moment. China’s largest carrying rocket today successfully launched. The heaviest, longest and arguably the most important craft in the country’s space history. The mission was well fulfilled, which is very exciting and exhilarating.”