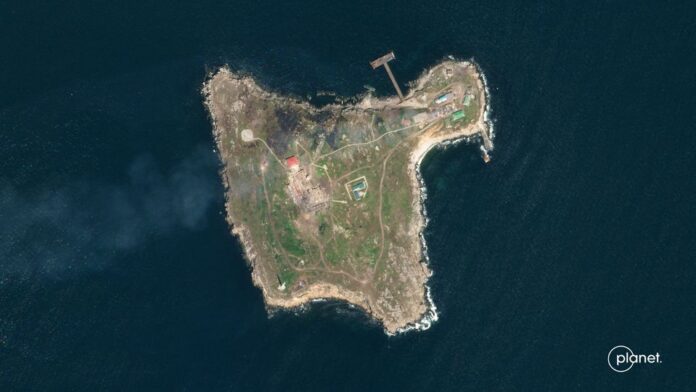 Ukraine claims a big victory on Snake Island against Russian forces. The troops of Ukraine claim to have scored a “significant” victory over Russian troops. That is after launching a new attempt to recapture Snake Island in the Black Sea.

Accordingly, the Ukrainian military operations command said in a post on Facebook. That it had used “targeted strikes by various forces”. To the island to inflict “massive losses” on Russian troops.

Satellite images provided by the US company Maxar Technologies show an overview of Snake Island. It shows visible damage to the tower at the southern end of the island. And, burning plants in several places.

Also, the Ukrainian news agency Ukrinform reports that the attacks damaged the Russian anti-aircraft system Pantsir. And, the radar station and cars on a small island.

On the other hand, the Ukrainian army said on Tuesday that it had carried out a total of 150 attacks in various areas. And, killed about 49 Russian soldiers. However, the number cannot be confirmed independently.

Military Fight Between Russia And Ukraine Over The Snake Island

At the beginning of War, Moscow conquered the strategically important Snake Island, which belongs to Ukraine. Last week, Ukraine said the Russian support ship Vasily Beh had sunk with a crew and weapons on Snake Island.

According to the British Ministry of Defense, Ukraine successfully used Harpoon anti-aircraft missiles. They received it from the West, in the attack for the first time.

On the other hand, Russia’s Defense Ministry, says it has rejected what it called “a mad attempt by Kiev troops to reconquer the island.”

They claimed the fires of the drones and firefighters. Heavy fighting continues in the eastern part of the Donbas.

Recently, British military intelligence investigation Department of Defense said there was a heavy bombing. And, Russian troops pushed to cover the Sievierodoneck area via Izium in the north and Popasnu in the south.

But, the Donetsk People’s Republic (DPR) has released casualty figures of its own forces showing the total. That is about 55% of his original strength was dead and wounded.

“This means extraordinary damage to the Russian and pro-Russian forces suffering in Donbas,” the Ministry of Defense said.